BUCK:AOC’s “tax the rich” dress got a lot of attention last week, right? We were all watching this play out where she shows up at the Met gala and you got everybody who is on her side of course saying, “Oh, my gosh! She’s so chic, she’s so avant-garde, she’s so spreading zee message!”

CLAY: That’s a heck of an accent there.

BUCK: Fancy, fancy. All this sort of stuff, Clay. And we said, “Hold on a second. You’re at a $30,000-a-ticket event, $250,000 a table; you are someone who drives around in a new Tesla, lives in a fancy apartment building,” I have friends who know where, “in D.C., and you’re talking about taxing the rich as though that’s some big statement?” It turns out that the woman who designed her dress knows something or perhaps doesn’t know enough about taxes.

Designer Aurora James who came up with the “tax the rich” dress, according to Fox Business here, she has an LLC. I’ll get the short and sweet here. “The company racked up three open tax warrants in New York state for failing to withhold income taxes from employees’ paychecks totaling $14,798…

“The company has been hit with 15 warrants in total since 2015,” and the IRS “placed six federal liens on Cultural Brokerage Agency totaling $103,220.” A hundred thousand dollars in unpaid taxes from the fancy dress-designing LLC. I’m just wondering. Maybe you’re not the person that would be the first you’d think of to be pointing the finger about taxes need to be paid. 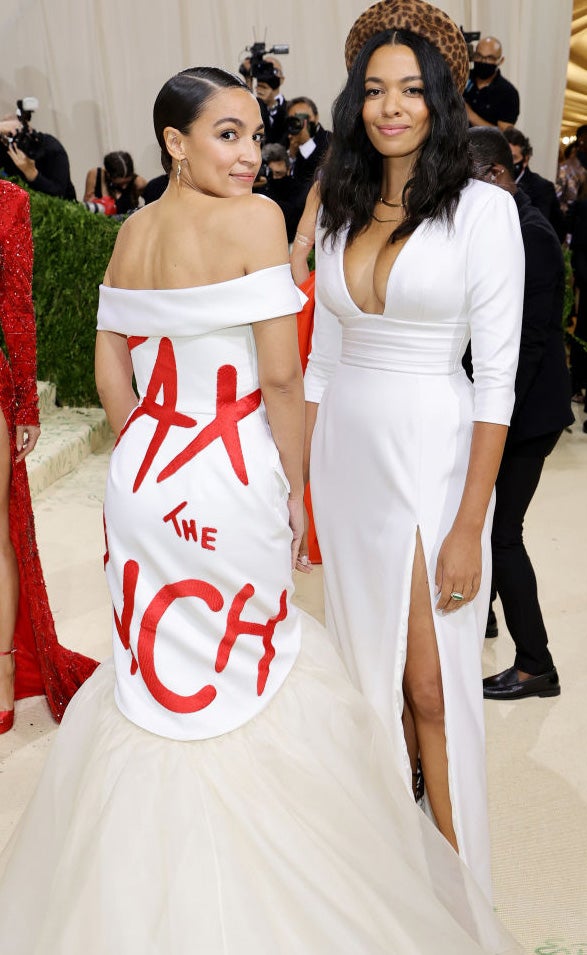 CLAY: Over a hundred K in unpaid back taxes for the woman who designed AOC’s “tax the rich” dress. The hypocrisy and the irony and the absurdity of all of this, you keep expecting for it to end. I will say on the one hand, it is totally unexpected for you to be able to do research, probably. Although AOC’s staff should know who she’s a consulting with. But I’m sure she probably doesn’t know that she owes a hundred thousand dollars in back taxes, AOC herself. But imagine being the dress designer. She has to know that she owes back taxes, right?

BUCK: This is kind of like the mask thing when people are hypothetical. When they go party without the masks on, I want them to be able to party without masks on.

BUCK: And I think the IRS is a monstrosity and harasses people, and the tax code is intentionally opaque to benefit certain interests and all that. But if you’re gonna lecture people about it, you’d think you’d find somebody who wouldn’t necessarily have this specific baggage.

BUCK: Yeah, and it’s just class warfare rhetoric, the problem… It’s really just, folks, it comes down to very basic human emotions here. Class warfare stuff works because people either are exploiting envy of those who are upset about others doing well or there are a lot of very well-off people who are very insecure about that accumulation, whether they inherited it or they feel like they exploited people to get there, whatever it may be, and they think by mouthing the preferred slogans of Marxism — while they’re at the Met gala — they buy themselves some social insurance.

CLAY: This is where every time I look at the tax code, I think more and more about how right Steve Forbes was back in the day when he ran on the concept of a flat tax.

CLAY: We just all pay off a postcard. Everybody knows what they make; you pay 15% of it. I think it was 15% flat tax. I was talking about this with my wife the other night, as we have gotten older and as our taxes have become more complicated. People have this idea that taxes are easy. You could go to 10 different tax accountants, I would right now, and they would give me 10 different numbers that I owe the IRS at the end of the year. It’s not just me. There’s lots of people like me. It’s a total joke.

This story originally appeared in Clay Travis and Buck Sexton

About The Clay Travis and Buck Sexton Show